WORKS MOBILE Japan Corp. (Headquarters: Tokyo, Japan, President & CEO: Yutaka Ishiguro, hereafter referred to as “Works Mobile Japan”), a company that provides LINE’s business version “LINE WORKS,” is pleased to announce that Kanagawa Prefectural Government (Governor: Yuji Kuroiwa) has introduced LINE WORKS at full scale with an aim to strengthen initial emergency response capabilities of “Kanagawa Shobo,” a disaster management scheme through which the prefectural government and all fire departments across the prefecture collaborate to support disaster-affected areas in the prefecture at the time of disaster.

Kanagawa Prefectural Government has formed Kanagawa Shobo, a collaborative team that consists of the prefectural government and all fire departments across the prefecture, which takes initiative to support disaster-hit areas at the time of large-scale disaster that cannot be tackled by a single fire department. In the past, the prefectural government and fire departments made contacts via phone call and fax for providing information on disaster occurrence, sharing disaster situations, arranging disaster response teams, etc. Yet, these information sharing methods caused communication delays. Therefore, Kanagawa Prefecture was required to strengthen its initial emergency response capabilities in order to smoothly share information with each fire department and conduct rescue operations and firefighting more rapidly than before.

Against this backdrop, Kanagawa Prefectural Government, Works Mobile Japan and transcosmos signed the “Agreement for strengthening Kanagawa Shobo’s initial emergency response capabilities.” Since then, the three parties have been working on various activities including identifying problems, developing operational rules of LINE WORKS, holding meetings to exchange opinions, conducting examinations of assumed disasters, and more. When Typhoon Hagibis, one of the severest natural disasters, struck Japan in October 2019, Kanagawa Shobo was able to share disaster information through LINE WORKS much faster than calls and faxes, and efficiently organize and deploy rescue teams to disaster-hit areas by grasping each team’s availability by using a survey function of LINE WORKS. In addition, the prefectural government staff and those in the disaster-hit areas were able to streamline their work with the read notification function as they didn’t need to call all fire departments but only those that didn’t read the post sent through LINE WORKS. Based on these achievements, Kanagawa Prefectural Government decided to introduce LINE WORKS, starting full operation on March 30, 2020. 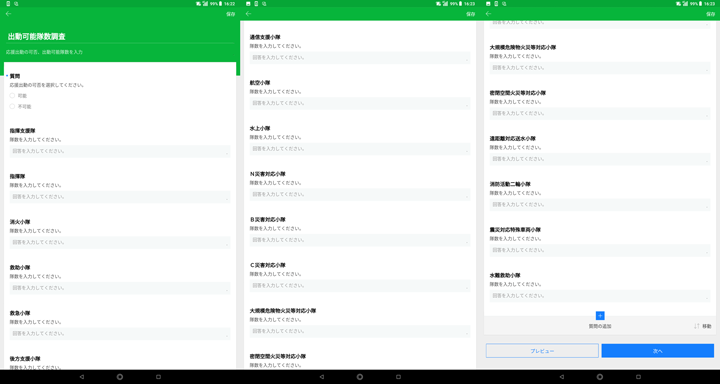 “With LINE WORKS, we can smoothly communicate with our Disaster Management Measures Headquarters and fire departments of each municipalities. In addition, with the read notification function, we can confirm who has read the message. When phones and fax machines were the main communication tools available, it was difficult for us to transmit information to everyone at the same time. Now we can do that via LINE WORKS, which is really innovative. LINE WORKS can also send video clips enabling us to share information even smoother. By utilizing new technology, we will create a better environment for preventing and controlling future disasters.”

LINE WORKS is “Business version of LINE” which offers business-friendly services such as bulletin board, calendar, contacts, and survey, as well as chat and stickers. The user interface is just like LINE, the widely used communication app., so anyone can start using it on the day without learning how to use it. In the “2019 Software Business New Market”*1 announced in August 2019, LINE WORKS achieved the top share in the paid business chat services market in Japan for two consecutive years.

*Company names and product names used here are trademarks or registered trademarks of respective companies.
*Information contained in this press release is current as of the date of the release and subject to change without notice.