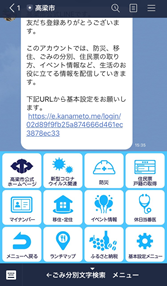 Setting its vision for its future as “Takahashi, the city being considerate of people, towns and nature,” the city has been focusing on overcoming population decline. To achieve the goal, Takahashi city provides a range of services via its LINE official account to assist people in moving to and settling down in the city. For people considering moving to the city, Takahashi city has prepared a chatbot that helps them solve questions about available support programs for moving to and settling down in the city, as well as for KONKATSU (spouse hunting). With the service, users can search any information that they want, 24/7/365 at ease.

Furthermore, to support both newly settled and existing citizens to continue living in the city far into the future, Takahashi city delivers essential information for their daily lives in their community. More specifically, Takahashi city offers chatbot services to provide them with various information such as disaster prevention information including hazard map and evacuation sites, procedures for applying, receiving and reporting the loss of My Number card, and the steps for applying for various certificates. With such services in place, Takahashi city aims to offer better services for its citizens than ever before.

Takahashi city has considered two options for its new initiative of communicating more actively with its citizens, namely, “opening LINE official account” or “deploying web chatbot to the city’s official website.” Given that LINE has as many as 86 million monthly active users (*) across extensive age groups including the main target of the city’s support program for moving and settling in the city, Takahashi city has decided to adopt LINE, and drive its initiative by strategically sending out information. With the aim of making the most of LINE, Takahashi city implemented “KANAMETO,” a tool that offers various features including segmented delivery and chatbot, and has an abundant implementation record with other local governments.
(*) As of September, 2020.

In order to increase the number of people moving into the city, Takahashi city will deliver the right information tailored to the needs of different types of audiences such as people considering a move to the city, new settlers, and existing citizens. Ultimately, Takahashi city aims to achieve its vision of making the city a place where all its citizens can live safely and comfortably for a long time.

On April 23, 2019, LINE Corporation (Headquarters: Tokyo, Japan; Chief Executive Officer: Takeshi Idezawa) announced that the company will release “Local Government Plan (*)” for its LINE Official Account services and began accepting the applications for the plan on May 21, 2019. Takahashi city’s LINE Official Account is one of the accounts registered under the plan.

In addition to offering “KANAMETO,” transcosmos online communications provided support for Takahashi city to apply for the “Local Government Plan,” and offered advice on ways to make the most of their LINE official account whilst helping them develop specific plans and configure settings based on its proven record in offering services to other local governments.

“KANAMETO” is a LINE-powered DX tool developed and offered by transcosmos online communications inc., a joint-stock company between transcosmos, LINE Corporation and salesforce.com Co., Ltd. Equipped with a questionnaire feature, KANAMETO enables businesses to deliver segmented messages based on user attributes collected via this feature in addition to a chatbot feature for having one-on-one chat communication with multiple LINE users simultaneously. By adding a new feature to integrate KANAMETO with Salesforce Service Cloud in October 2019, it became easier to visualize customer service performance and to perform analysis to increase productivity. Moreover, in May 2020, transcosmos online communications launched a reporting feature specifically designed for local governments through which their citizens can report issues they have found related to public road and park conditions.

transcosmos launched its operations in 1966. Since then, we have combined superior “people” with up-to-date “technology” to enhance the competitive strength of our clients by providing them with superior and valuable services. transcosmos currently offers services that support clients’ business processes focusing on both sales expansion and cost optimization through our 169 bases across 30 countries/regions with a focus on Asia, while continuously pursuing Operational Excellence. Furthermore, following the expansion of e-commerce market on the global scale, transcosmos provides a comprehensive One-Stop Global E-Commerce services to deliver our clients’ excellent products and services in 48 countries/regions around the globe. transcosmos aims to be the “Global Digital Transformation Partner” of our clients, supporting the clients’ transformation by leveraging digital technology, responding to the ever-changing business environment.