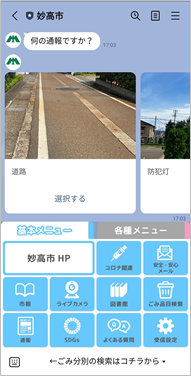 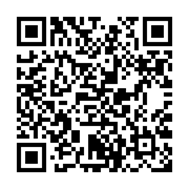 Myoko city released its renewed “Myoko City LINE Official Account (Account name: Myoko City)” on October 1, 2021. Via the account, the city sends out segmented messages that contain various information including disaster prevention, security, events & facilities, novel coronavirus diseases, as well as regular messaging on the trash collection calendar based on residential areas. In addition, the city offers a chatbot service that helps its citizens resolve their questions about child care support services, trash, and moving to and settling in the city.

Furthermore, using the renewed account, the city now receives reports from its citizens on road-related trouble including road damage via LINE. So far, Myoko city has been gathering information about road and security light trouble using “M REPO or M Reporting,” a system with which citizens post images and location information of troubled roads and lights. Yet, since citizens had to download dedicated apps for their mobiles and tablets to use “M REPO,” the city has been seeking a way to make the service more convenient for its citizens. To achieve that goal, Myoko city focused on LINE, an app for instant communication with as many as 89 monthly active users (*), implemented “Reporting Solution” by KANAMETO, and ultimately made it possible to receive reports from citizens via LINE.
(*) As of the end of September, 2021.

With its reporting feature available on Myoko City LINE Official Account, Myoko city now receives reports on road damage, security light trouble, and water pipe leaks. Users can send images and location information of damaged parts just by following chatbot’s reporting scenario, which increases the accuracy of reporting. At the same time, the reporting system has become highly convenient for its citizens since they can complete the reporting process within the LINE app, their everyday tool.

transcosmos and transcosmos online communications will continue to assist Myoko city in sending out their municipal information whilst encouraging citizens to provide information to the city via LINE, so that citizens and governments can work together to make safe and secure towns and cities.

transcosmos launched its operations in 1966. Since then, we have combined superior “people” with up-to-date “technology” to enhance the competitive strength of our clients by providing them with superior and valuable services. transcosmos currently offers services that support clients’ business processes focusing on both sales expansion and cost optimization through our 171 bases across 30 countries/regions with a focus on Asia, while continuously pursuing Operational Excellence. Furthermore, following the expansion of e-commerce market on the global scale, transcosmos provides a comprehensive One-Stop Global E-Commerce Services to deliver our clients' excellent products and services to consumers in 48 countries/regions around the globe. transcosmos aims to be the “Global Digital Transformation Partner” of our clients, supporting the clients’ transformation by leveraging digital technology, responding to the ever-changing business environment.