transcosmos opens a new center in Neijiang City, Sichuan Province, its first operations center in the southwest region of China 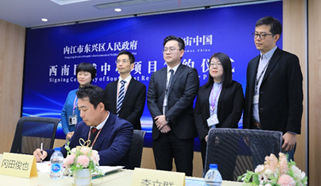 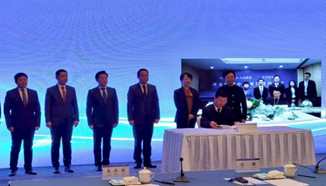 At the ceremony, which was held online to prevent the spread of Covid-19, Mr. Xu Rongbin, member of the Standing Committee of Dongxin District Committee, and Executive Deputy District Head of Dongxing District, Neijiang City (Right) and Mr.Toshiya Okada, General Manager of transcosmos China (Left) signed the agreement.

A key transport hub in the southwest of China, Neijiang City is situated at the heart of the Chengdu-Chongqing Economic Circle in the southeastern area of Sichuan Province, the province known as the Country of Heaven with a population of 83.67 million. In order to boost regional development initiatives, the city proactively invites companies in the BPO/IT industries. transcosmos launched “Neijiang Center,” which opened in the Dongxing District, Neijiang City, with 300 workstations and will gradually expand in size up to 1,000 workstations in five years.

Mr. Kang Houlin, secretary of the Standing Committee of Dongxing District Committee, Neijiang City said at the signing ceremony: “transcosmos is a world-renowned BPO service provider, highly regarded for its contact centers, digital marketing and BPO services. We are confident that the opening of transcosmos China’s Neijiang Center in Dongxing District, in the southwest region of China will be beneficial for the district in growing, innovating and advancing the BPO industry.”

Mr. Toshiya Okada, General Manager of transcosmos China expressed his gratitude to the government officials and commented: “We, transcosmos, have been striving to help our clients enhance their competitive strengths with our high-quality, high-added value BPO services. We have decided to enter the Dongxing District, Neijiang City, because we fully recognize the business environment there, its potential to attract talented people as well as governmental supportive policies that the city and the district offer. Going forward, we will implement new technologies including data analytics and AI, fully unleash the power of local talent and cost advantages, and ultimately offer highly cost-effective contact center services. At the same time, we will create and provide young people in the local communities with various employment opportunities, and develop more talent.”

Mr. Bi Sheng, Vice Mayor of Neijiang City said: “Today, we held an online signing ceremony, commemorating the construction project of transcosmos China’s first operations center in the southwest region of China. This is a whole new approach to hold a signing ceremony, going beyond time and space, and marks the starting point for our collaboration. On behalf of Neijiang government, I would like to extend my warmest congratulations to you all for a successful project kickoff. We strongly believe that transcosmos Group’s sharp insight into market opportunities and its entry into Neijiang City will spur significant growth for transcosmos, as well as instill renewed vigor and stimulate momentum in the city, thereby promoting the advancement of the city’s outsourcing industry.” 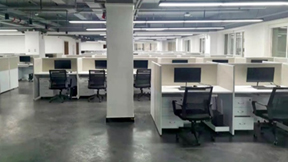 As of now, services are offered from a temporal center facility, and these will be relocated to the Neijiang Center once construction is completed. With the opening of the new center in collaboration with the regional government, transcosmos will provide a range of contact center solutions to many more clients.

transcosmos entered the Chinese market and launched its offshore services business in 1995. In 2006, the company opened its first call center in Shanghai ad started to provide call center services for the Chinese market. Today, transcosmos has its bases and subsidiaries across 22 cities in China including Shanghai, Beijing, Tianjin, Hefei, Xi’an, Changsha, Wuhan, Suzhou, Neijiang, Taipei and more. The company offers extensive services such as business outsourcing including contact centers, e-commerce one-stop, digital marketing and system development for both Chinese and global brands.

transcosmos launched its operations in 1966. Since then, we have combined superior “people” with up-to-date “technology” to enhance the competitive strength of our clients by providing them with superior and valuable services. transcosmos currently offers services that support clients’ business processes focusing on both sales expansion and cost optimization through our 173 bases across 30 countries/regions with a focus on Asia, while continuously pursuing Operational Excellence. Furthermore, following the expansion of e-commerce market on the global scale, transcosmos provides a comprehensive One-Stop Global E-Commerce Services to deliver our clients' excellent products and services to consumers in 48 countries/regions around the globe. transcosmos aims to be the “Global Digital Transformation Partner” of our clients, supporting the clients’ transformation by leveraging digital technology, responding to the ever-changing business environment.