Received over 30,000 entries and obtained 16,000 followers during the 7-day period.
We built a Twitter operation system with over 60 members in one month to hold a large-scale, real-time campaign.

Twitter campaign planned for “Tanrei Green Label,” one of the main brands

We were able to come up with a fun campaign with emphasis on having real-time, person to person interactions.

This campaign’s goal was to have busy people enjoy a break by participating in this campaign and to have them experience the brand’s world view.

In addition to being an advertisement, the plan was a fun project where we dispersed hashtags, interacting with users real-time, which the users could enjoy like a game. Through One to One communication with customers, a deep level of engagement was created.

Our problem was the tight schedule and complicated operations; however, transcosmos possesses a social media center capable of responding flexibly to large-scale operations, and in addition to the experienced facilitator, it had management experience and knowledge, so we could fully trust transcosmos to delegate the task.

In situations where auto responses are normally expected, we requested human responses be made, and transcosmos gladly took on the task, for which we are very grateful for it allowed us to hold our campaign very successfully.

We would like transcosmos to continue suggesting new challenges using social media and events to attract attention.

The time period was one hour per day, limited to 7 days, Real-time, user-interactive campaign using Twitter, with a wide reach

Out of over 40 official accounts on the social media, Kirin held a Twitter campaign for “Tanrei Green Label,” one of the main brands. The nature of the plan is “Twitter tag” game making full use of the Twitter media which allows companies to interact real-time with the users.

The users tweet “#itsokay” through the specially-featured website, and they win if they can run from “Oni (demon = it)” for 30 minutes and win a right to participate in the campaign to receive Tanrei Green Label. They lose if they receive a reply from the Oni saying “#itsgreen” within 30 minutes.

However, since the participation rules were simple, it became a large-scale campaign with many participants, which made it difficult to build the management system. Therefore, transcosmos stepped in with its social media management know how and its ability to build management systems flexibly.

Pursuing reality, we built an “Oni team” in one month with over 60 members with an emphasis on human responses

Approximately 1,500 users’ participation was projected during the 60-minute period a day.
In order to accommodate accesses from many participants, we prepared six different patterns of Oni (demon = it) and gathered a team of over 60 members with the operation teams in Tokyo and Okinawa. Also, so that the users feel the excitement of playing tag and feel the distance with the Oni more closely, we built an operation system pursuing more reality that the automatic responses cannot accomplish and emphasizing replies by the facilitators. However, it was not easy to build a logic to operate six Onis efficiently at the same time, avoiding overlapping replies.
Therefore, taking advantage of transcosmos’ experience in the management experience and know how in the social media, we designed a business flow for responding to the tweets, reviewing the tweets, selecting the winners, and notifying the winners. We had held remote training with Okinawa Center and repeated numerous times the simulation with the expected actual moves and established a system to make speedy and efficient operation possible. So that the user can still have fun even when he or she gets caught by Oni (the demon), multiple reply screen were prepared, and each Oni has a different reply comment, creating a story for fun.
In addition, pursuing real-time, upon verifying that the user who makes it to the goal is an adult, the winners are selected, and a flow was designed so that the winner notification is made the day after the tag is completed.

With this Twitter campaign attracting attention and allowing the company to connect with many users as a starter, Kirin hopes to continue considering new plans utilizing social media.

transcosmos will continue to utilize its experience in social media management for promotion planning and operational design in order to contribute to expanding Kirin’s sales with a flexible operation system as a pillar. 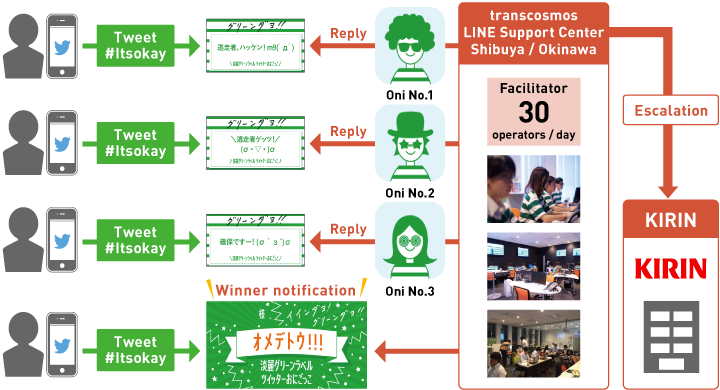