Together we are putting into practice our company’s management policy of “customer centrism” while receiving support from the industry’s best support center operations.

The call center in Sapporo, which was launched in cooperation with transcosmos, has enthusiastically celebrated the 10th anniversary of its opening. The number of staff members has also grown to 200 from the original 30 persons, providing support for one million customer accounts nationwide.

Initially at the time of the launch, mainly regular employees served in managerial positions, but due to careful development and growth of the highly-motivated staff, now almost all management and operations are handled by the local personnel.

In addition to our own training know-how, the center continues to develop through ongoing human resource development, and the growth of individual staff members leads to customer satisfaction and in turn to company growth.

We want to continue moving ahead together in the future so that we can enjoy the patronage of our valued customers for a long time to come.

A few years later, in addition to technical support, it also became possible to outsource customer support and an operations structure was established at the Tokyo Center.

Moving into the 2000s, the number of users also increased as the Internet became more popular in the home. Against this background in anticipation of further business expansion, Matsui Securities contemplated making a major enhancement to its support system, and decided to open the Sapporo Center.

The biggest challenge in establishing the center was securing a qualified staff of securities sales representatives. This was a mandatory prerequisite for a securities contact center, and it was necessary to secure 100 people in the first year. transcosmos developed its own operator training scheme in order to solve this problem. A curriculum was formulated which allows acquisition of the skills necessary for obtaining qualifications, while taking charge of tasks that do not require qualifications. As a result, it was possible to develop the target number of qualified persons, and within a short time after opening the contact center operations were achieved.

The largest scale of support in the industry, operated by an organization of five Matsui Securities personnel and nearly 200 transcosmos operators

When the Sapporo Center was initially opened in 2005, support was provided at two locations, in Tokyo and Sapporo, but as of 2016 all support has been consolidated in Sapporo, where 30,000 inquiries are handled each month.

In recent years, in addition to customer support, securities office work has also been contracted, and a wide range of support is performed for online stock trading services. The scale of this personnel system is the largest as compared with contact centers in the same industry.

In the securities industry, since the circumstances of users will change according to fluctuations in the Nikkei Stock Average, busy periods may be encountered suddenly. Under such circumstances, operators are focused on responding to incoming calls, and as we operate flexibly with a system tailored to the conditions of the day, sometimes even managers will provide support such as receiving incoming calls.

Although Matsui Securities has received recognition from various independent rating organizations such as these, they are pursuing further user satisfaction, striving to utilize a variety of channels in order to support users. transcosmos has prepared support systems tailored to each channel, and will continue providing industry-leading support for Matsui Securities and the customers using their services by performing thoughtful support according to the needs of Matsui Securities. 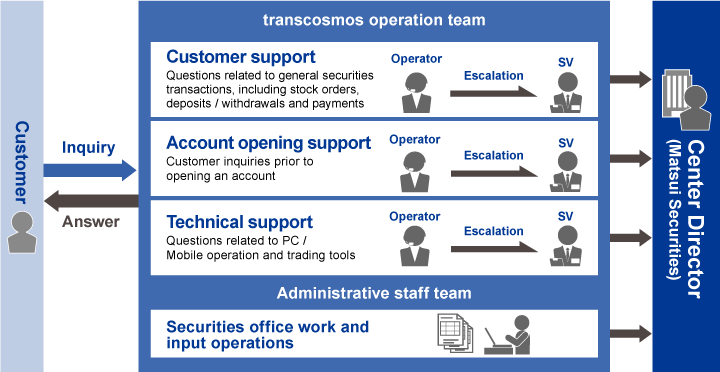