*Above figure is based on social media. 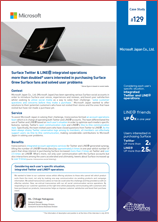 We wanted to listen to our customer voices whilst offering solutions to those who cannot tell which product suits them the most, not only by making one-way communication via sending products and campaign information. We asked transcosmos’s advice on how we could solve this challenge and they provided us with an effective solution. Now, we entrust transcosmos with our all social communication service operations. By responding to our customer questions at the right time whilst pleasantly communicating with customers who have purchased our products, transcosmos helps us improve customer satisfaction and boost their purchase intent.

Microsoft Japan Co., Ltd. (Microsoft Japan) offers Surface devices that perform as laptop-to-tablet. The company has been operating various Surface social accounts in order to introduce Surface user voices, experiences and reviews, and boost user satisfaction whilst seeking to utilize social media as a way to solve their challenge: “solve customer questions and concerns before they make a purchase.” Microsoft Japan wanted to offer solutions to their potential customers who have not visited their stores and the ones that have visited but have not made a purchase yet.

In order to solve the challenge, Microsoft Japan asked transcosmos for its advice respecting its experience in social marketing, deep insight in LINE services, and its high quality and proven record in chat communication services. transcosmos then presented a service that uses both Twitter and LINE@ to solve customer problems and concerns before and after a purchase. Believing in the proposed service, Microsoft Japan entrusted transcosmos with Twitter and LINE@ account operations.

To assist Microsoft Japan in solving their challenge, transcosmos formed an account operations team which is in charge of operating both Twitter and LINE@ accounts. The team differentiated the use of Twitter and LINE@ based on each user’s situation in order to optimize each media’s specific features, namely, Twitter’s open communication style and LINE@’s One-to-One communication style. Strong teamwork was critical in order to ensure service quality as users switch back and forth between their Twitter and LINE@ accounts. In principle, the team uses Twitter to have more active communication with existing users who use social media and accounts that show interests in purchasing Surface related products. On Twitter, the team starts a conversation with these accounts and then provides information and customer support or just has a casual chat. For closed questions, the team invites users from Twitter to LINE@. As the team always shares Twitter conversation logs among its members, all members can effectively support users via One-to-One communication, making considerable contributions to Microsoft Japan in solving user problems.

The team uses LINE@ for various communication purposes that include explaining to users how to use Surface, supporting them setting up their devices, providing campaign information, explaining device specifications, and more. For a 3 month Twitter bot campaign that ran from March 2018, the team designed bot communication scenarios and conversation flows based on the chat logs (conversation log) that were accumulated through their past operations. The abundant log data enabled the team to have a natural and seamless conversation with users from start to finish, discovering their needs and making product recommendations. Ultimately, those conversations helped Microsoft Japan make the campaign a success. Going forward, transcosmos plans to deliver hybrid operations that combine bot and agent services on LINE@ in order to have more effective communication with Surface users than ever before.

transcosmos’s integrated account operations services for Twitter and LINE@ generated synergy, lifting the number of LINE@ friends (fans) by approximately 6 times in one year whilst number of users that show interest in purchasing Surface increased more than 2 times on Twitter and over 2.5 times on LINE@. Owing to the strategy of having a casual communication, not a sales pitch, whilst being considerate to users, positive views on Surface brand spread by word-of-mouth. Users actively tweeted how they utilize Surface and introduced Surface’s Twitter and LINE@ accounts to other users who needed help that led them to solve their problems. What’s more, not only user communication with the Surface accounts but also interactions among the users accelerated and ultimately, tweets about Surface increased up to over 5 times (source: transcosmos social listening).

transcosmos continues to assist Microsoft Japan in boosting their customer satisfaction and brand quality not only by offering stable account operations services but also by presenting proposals for utilizing bot on LINE@ and delivering various Twitter and LINE@-based promotions and innovative operations. 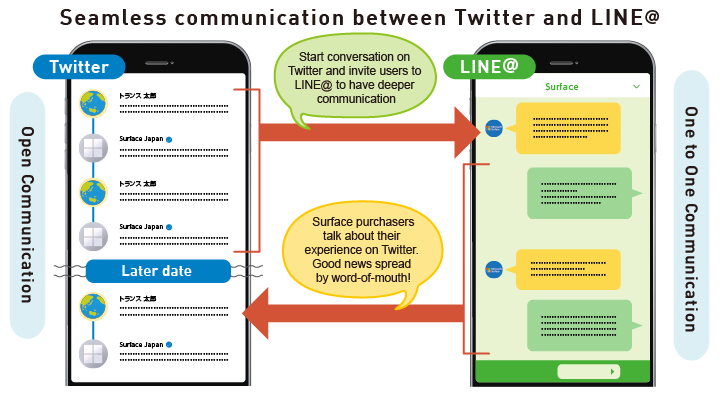