In an effort to promote SDGs, transcosmos assists the municipality in achieving its initiative by using a corporate version of the furusato nozei, Japan’s hometown tax donation program 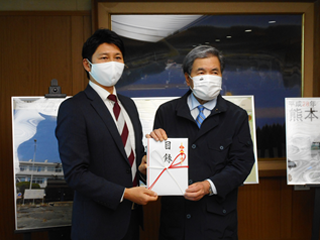 transcosmos opened the BPO Center Kumamoto in December, 2008. Since then, with the aim of becoming a community-based company, transcosmos has been contributing to the revitalization and development of the prefecture by creating employment opportunities. Today, with 750 employees, transcosmos provides BPO services, primarily order management services and back-office operations. At the time of the Kumamoto earthquake that hit in April, 2016, transcosmos successfully continued its operations thanks to support and cooperation from employees and the local government. To show its gratitude, transcosmos has been working on the disaster restoration project. Reflecting its close relationship with the prefecture, transcosmos has agreed with the concept of “The 2016 Kumamoto Earthquake Memorial Museum – A Corridor of Memories,” and donated to the museum using a corporate version of the hometown tax donation program called furusato nozei.

Here are the comments received from Ikuo Kabashima, Governor of Kumamoto prefecture.
“I would like to thank transcosmos inc. for the donation have made to support our initiative, The 2016 Kumamoto Earthquake Memorial Museum. This April marks the fifth anniversary of the 2016 Kumamoto Earthquake. Whilst making steady progress with our restoration and recovery efforts we must take care not to forget the events of April 2016, and ensure that the memories and lessons learned from this disaster are passed on to future generations. We are deeply grateful for your support of the 2016 Kumamoto Earthquake Memorial Museum. We will further develop this museum by building an experience/exhibition facility which incorporates sites where evidence of the earthquake can be seen, and by working together with the eight disaster-hit municipalities to create “a corridor of memories”. This donation will go towards achieving these goals. We cannot thank you enough for your tremendous support for our prefecture since your center opened in 2008, and we appreciate your continued support.”

Here are the comments received from Kentaro Nishida, Center Manager of BPO Center Kumamoto at transcosmos.
“The 2016 Kumamoto Earthquake Memorial Museum – A Corridor of Memories” sets the trend of future disaster mitigation and prevention, and national resilience as a new model for making recovery from disasters. We would like to thank all members of Kumamoto again for your efforts in trying to continue our business operations in the chaotic situation caused by the 2016 Kumamoto Earthquake. It is possible to stem the spread of damages with a rapid, effective disaster response, and to make that possible, we must remember the examples of the past, and instill them into our daily lives. We, transcosmos, have made a donation respecting the concept of the museum. We will continue to make efforts to contribute to the development of Kumamoto prefecture.”

As the world faces ever-increasing uncertainty caused by various reasons including the novel coronavirus disease and climate change, Kumamoto prefecture’s initiative to pass on the memories of the disaster and visualize the risks and damages has profound importance. The initiative reminds corporations that they should be ready to continue their business operations under any circumstances, and local communities to prepare for creating sustainable society. As a member of the community, transcosmos has made a contribution to make Kumamoto a sustainable community where businesses can continue their operations.

With the aim of creating job opportunities and contributing to the revitalization and development of every community where it operates, transcosmos provides a diverse range of services including BPO, contact centers and digital marketing with 67 locations across Japan. transcosmos’s services have become critical social infrastructure under the Covid-19 crisis, and its employees and municipalities across Japan have given significant support to make the company continue its operations. Not only as its initiative to promote SDGs but also to show its sincere gratitude for its employees and the municipalities where they live, transcosmos will continue to assist initiatives led by the local governments by utilizing the corporate version of Japan’s hometown tax donation program, the furusato nozei.

transcosmos launched its operations in 1966. Since then, we have combined superior “people” with up-to-date “technology” to enhance the competitive strength of our clients by providing them with superior and valuable services. transcosmos currently offers services that support clients’ business processes focusing on both sales expansion and cost optimization through our 169 bases across 30 countries/regions with a focus on Asia, while continuously pursuing Operational Excellence. Furthermore, following the expansion of e-commerce market on the global scale, transcosmos provides a comprehensive One-Stop Global E-Commerce Services to deliver our clients' excellent products and services to consumers in 48 countries/regions around the globe. transcosmos aims to be the “Global Digital Transformation Partner” of our clients, supporting the clients’ transformation by leveraging digital technology, responding to the ever-changing business environment.